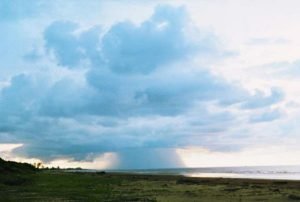 A couple years ago, Mr. 4-Ever was out of town and I was home alone watching the tornado’s swirling formations on the weather channel when sirens started blaring their warning.

Outside, the sky was greenish gray and there wasn’t a wisp of wind. Almost simultaneously, a text notification beeped on my cell phone. A tornado warning had been issued and my house was in its path.

I hurriedly began collecting the things I can’t live without when the kitchen door burst open. Eli, my firefighter son, called loudly, “Mom! Mom! Where are you?” “I’m in the office, Eli. What are you doing here?” “I heard the warning on my scanner and I came over to be with you in case you were scared.”

Before I could even get the Aww, that’s so sweet of you out of my mouth, he started barking directives.

Who put you in charge?

“Get a bottle of water, a blanket and a flashlight and go to the basement NOW!”

“Eli, I have to get my Bible and the family photos! I need my purse and the box with the passports and birth certificates.”

He looked at me earnestly and said firmly, “Mom, there’s no time.”

Outside, the wind was whipping trees branches and the rain pelted against the windowpanes. I grabbed my Bible because it was in my path to the basement, but knew there was no getting past him to collect anything else.

I headed down to our Michigan basement (blech) – to wait out the storm. Eli did not follow. “What are you doing?” I shouted up to him, “Why do I have to be down here and you don’t?”

“I’m a trained professional, Mom. I’m closing up the house and I’ll be right there.”
When he arrived moments later, he said, “Ok, the house is as ready as it can be. All we can do now is wait and pray.”

I admired his calm and thought to myself what a good job I had done raising him. I take all the credit when my kids do something good. Their father gets the blame for any dangerous or foolish things.

Eli broke my silent admiration when he says, “I’ll let you know when it’s safe to go upstairs.”

Honestly, Friend, I didn’t know whether to laugh out loud or set him straight on who should be in charge of an all clear. I decided to yield.

You can’t expect children to become leaders who take responsibility if you never give them any!

As we sat together in a corner of my fieldstone basement, I asked him, “Eli, when did you get all grown up and bossy?” He smiled at me and said, “I learned from the best.”

The storm passed. Aside from a few limbs in the yard, we escaped unscathed. It did my heart good to experience Eli’s concern, compassion and leadership.

When kids are under your roof and on your last nerve, it’s easy to lose sight of the goal.

There were seasons when I was sure they’d never get it. I wore my jeans thin at the knees praying the connections in their brains to work. There were seasons when the music was so loud and the tempers were so short I thought we’d all burst into flames. There were broken bones and broken hearts and crashed cars and chainsaw accidents. So many moments I didn’t think we’d make it, but we did.

When you have raised your children, they leave you with a wave and grin, because you have taught them to be brave and bulletproof.  Without actually saying it, you know they know you love them and so does their Heavenly Father.

To all the mamas out there who are sending a child off to kindergarten or college soon, wipe the tears from your eyes and know the work you do as a  mom is the most important mission field you will ever have.

I pray that every once in a while, you catch a glimpse of your efforts in action. And I pray you learn to enjoy every season of parenting.

Verse for today: Children are a gift from the Lord; they are a reward from him. Psalm 127.3 NLT

Prayer: God, I need you to raise my children to know and love you. The ones in my home, the ones on their own, the ones in the nursery and the ones down the block. Give me patience and stamina, Lord, You know how hard it is. You raised me. Amen.

Posted in Bible, change, faith, God, Life Lessons and tagged Children think they're the boss!, give children responsibility, Storm Alert!, teach children to be leaders, Who put you in charge?
← How Do You Peel An Egg?4 Ways to Overcome Adversity →