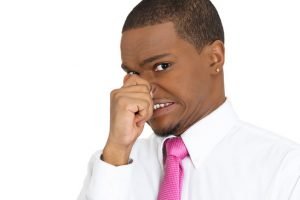 We all have to face stinky stuff in our lives.

What do you do when the washing machine overflows? How do you react to a really negative post on your Facebook page? Can you keep your cool when your curling iron overheats and melts your hair? Imagine discovering that your car has been towed!

In John 11, Lazarus is deathly sick and his sisters, Mary and Martha, are stuck in a stinky situation. When Jesus finally shows up, Lazarus is already dead and has been in the grave four days!

The sisters are crying, the mourners are crying, even Jesus cries. They are still weeping and wailing at the cave/grave where a stone has sealed in the body of Lazarus.

Then Jesus makes the most remarkable request.

He says, “Take away the stone.”

Martha jumps in and says, “But Lord, by now there is a bad odor!” In response, Jesus said, “Did I not tell you that if you believe, you will see the glory of God?”

When faced with a big stink, it’s easier to leave well enough alone. To settle for what you’ve got instead of contending for all the good stuff God has for you.

At Jesus’ request, they do take away the stone and there is a stink!

The stink isn’t there to symbolize sin. Nothing in the text indicates Lazarus was struck down because of sin.

They had to PUSH THROUGH THE STINK to get the miracle.

Sometimes you have to push through the stink to get to the good stuff. But, Friend, good stuff is coming!

Jesus called in a loud voice, “Lazarus, come out!” And, the dead man came out!

Are you facing down some stink in your life?

I don’t know what you’re facing today, but if Holy Spirit is telling you to do, or to go, or to say something that seems wild and outlandish, just do it.

Face down your fears, push through the stink and claim your miracle or your calling or your peace.

Don’t let stink DELAY God’s Glory from being revealed in your life. Decide not to  let stink DISTRACT you from seeing the miraculous. Above all don’t let stink DETOUR you in doubt instead of believing.

It takes perseverance to push through the stink that’s distracting or detouring you.

There is a fresh testimony waiting just beyond the stink. I’m sure of it.

Push through the stink to get to your miracle or victory or Good Stuff.

What is the stink that’s holding you back from experiencing God’s glory and favor? And what do you need to do to push through it? Leave me a comment, I’ll be happy to encourage you!

Verse for today: But these are written that you may believe that Jesus is the Messiah, the Son of God, and that by believing you may have life in his name. John 20:31 NIV

Prayer: Jesus, thank you for drawing me to yourself. Use my story, my mess, my moments to reveal yourself to others. Amen