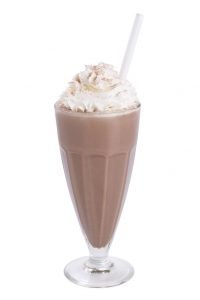 Just gotta have it!

Mr. 4-Ever and I were driving home from an event on a hot and sunny day. We’d been on the road for hours and I just had to have a break … and a chocolate malt. A jumbo cup of thick, chocolatey deliciousness.

I tried to talk myself out of it but the hankering would not go away.

“What do you think about taking a little break to stretch and maybe have some ice cream?” I asked Mr. 4-Ever. Golden Arches appeared on the horizon of the next exit.

Mind you, McDonald’s will do, but I had something a little different in mind. I wanted hand scooped ice-cream and malt powder mixed whirled together with whole milk.

By divine coincidence, there was an ice cream stand right across from McDonalds.
“Can we go there instead?” I asked Mr. 4-Ever excitedly. He was already in McDonald’s mode: drive-through quick, inexpensive and satisfactory. Already in the turning lane, he said, “No, let’s just stick with McDonald’s.” “Ok,” I drooped, “I have to use the ladies room anyway. I’ll go in and get the shake.”

At the counter, I saw a big “OUT OF ORDER” sign on the machine that oozes ice cream. I was practically giddy as I asked, “Is your milk shake machine working?” “No, I’m so sorry, ma’am. It’s broken. May I get you something else?” “No thank you,” I giggled with delight.

I skipped back out to the car to tell Mr. 4-Ever the news. “Are you kidding?” he questioned suspiciously.

You deserve the best.

Now, to be honest, it’s not beyond the realm of possibility that I might exaggerate the truth to get what I want, but God had something better than either of us were willing to settle for.

“Nope, I’m not kidding. They have no ice cream capability today. We’ll have to go to the ice cream stand, after all.

Mr. 4-Ever drove to across the street and parked. The entire length of the outside wall of the ice cream stand was painted in big swirling script.

I looked at Dave triumphantly and said, “We would have settled for a McDonald’s shake when God really wanted us to have a thick, hand-made chocolate malt. You deserve the best, Dave!”

Mr. 4-Ever nodding his head smiling and said, “Isn’t God good?  He loves us so much!”

This time it was a chocolate malt. Last week, it was a speaking opportunity I thought was a NO GO. Two years ago, it was finding the tiny watch jewel in the snow. Three years ago, my stolen purse was recovered by the police in a different state with all the contents still inside. Five years ago, it was a great deal on a laptop computer I was sure we couldn’t afford.

I forget to expect good things from our good, good Father. Don’t settle for the mundane when God offers the miraculous! We settle for so much less than our Father has to offer.

Expect good things from God today. How has God shown up for you in an extravagant way?

Leave me a comment or story of God’s favor below.

Bible Verse for today: The Lord is good to all, and His tender mercies are over all His works. Psalm 145:9

Prayer: Lord, remind us of how much you love us and of all the good things you have in mind and in store for us. We forget so easily that you are our Provider and good good Father. We love you. In Jesus name, amen.

Posted in God and tagged don't settle, Don't settle for less than God's best, Expect good things from God, Good father, out of order, thick malted, You deserve the best
← 4 Ways to Overcome AdversityPruning is Painful … and Necessary →