It’s been a week! Dave’s dad died from cancer he was diagnosed with 5 years ago.

This week we emptied out his rental home, planned his memorial service and hosted the funeral. The house is cleaned, the boat is gone, the lawn tractor sold and delivered, the guests have come and cried and gone and tonight Dave and I are sitting in the aftermath.

You have weeks like that??? When the projects are BIG and relentless and overwhelming and it feels like you’re never gonna get through them and then you do but you’re so tired, you can hardly think.

Wow, so hard, but here’s what I learned this week that I wouldn’t have if it had been easier.

People are more important than projects.

Dave needed me by his side this week and I was happy to invest the time with him: working at his dad’s home – sifting, sorting, and cleaning. And also sitting, talking, remembering, and listening.

It wasn’t that I didn’t have work to do (if I owe you an email or phone call, I’ll be getting to those this week) but I prioritized my people over my projects, and for that I have no regrets.

We could not get it all done. We had to ask for help. Help with ugly, messy, time consuming tasks.

We needed help and our friends loved us enough to jump in and shrink the tasks.

Oh my stars the laughs we’ve had. The emotions, memories and fatigue created the perfect trifecta for the giggles.

The Bible tells us laughter is good medicine and it surely was. When Dave put on a hazmat suit and talked about his dad’s toxic socks as part of his eulogy, everyone lost it and it felt wonderful. 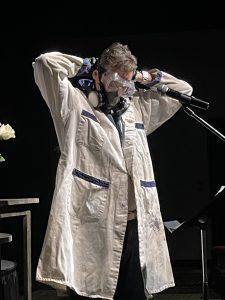 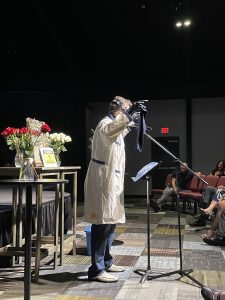 Look for the good.

Russ was so frail,  even though he really wanted to stay in his home, he needed to have 24 hour care. Dave had been actively searching for a facility to take him but the application process was arduous.

Even more important than his home care was his spiritual health.  We did not know if he’d said yes to Jesus. In recent months, he’d been more open to conversation about Jesus and was even meeting with a hospice chaplain.

The morning Russ died, Dave went to his home and ended up waiting on coroner instead of visiting with his dad. He prayed for final assurance.

Lord, I want to know my dad is with you. I don’t want any regrets and I’m asking for a sign.

An hour later, he got a email from the social worker, who didn’t know Russ had died, so she was still trying to get Russ placed.

“Good news, Dave, your dad has been accepted!”

Now you and I both know she was referring to the nursing home we’d been waiting for, but it felt very much like a God wink. Maybe even a prophetic word that God was letting Dave know his dad was in the presence of the Lord.

We won’t know for sure till we enter the gates of heaven, but we are very hopeful that Russ will be there, too.

Even when the days are hard and the tasks are messy and the circumstances are dreadful, we can see His hand on our lives and His love in action.