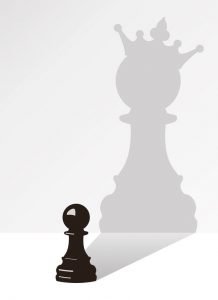 A couple weeks ago, I was speaking at a retreat and I told the story of when I was saved by Jesus.

My boyfriend had taken me to a Christmas program when I received the good news that Jesus Christ is the Son of God, who died to pay for my sins and rose from the dead after 3 days in the grave. That because he was raised from the dead, I could be, too.

That was good news! So I took out a get out of hell insurance policy and got saved.

I was saved ……… but I wasn’t surrendered. I wanted a Savior, but I didn’t want a King. I wanted to rule my own life.

I proceeded to treat God as a body guard. God was to stay out of my way unless my life was in imminent peril, then he had my permission to toss around a lightening bolt or two to save my life.

See, with no one to guide me or teach me or establish who God really was and who I was to him, I was ill equipped to live any differently than I had in the days before the Christmas concert.

It wasn’t until years later when I became a mom that I went searching for answers about God. The church I wandered into suggested I attend the Ladies bible study and that’s when I encountered God Almighty.

The ladies in my small group took me on as a project and never made me feel like one. They made me feel like I belonged there, even though I wasn’t much like them. They included me in their discussions, they invited me to their homes for socials, and demonstrated the love of God to me in such a compelling way that I wanted what they had. In order to have that, I needed to believe they way they believed.

I had to believe Jesus is more than a sentry on duty to protect me.

I had to come to terms with the fact that my life wasn’t working with me at the helm. That I needed to let God lead, guide and direct me. I had to surrender my will to his.

It will probably be no surprise to you that when I did that, my life got a lot better.

Nasty habits fell away.
Relationships were richer.
I had more confidence in parenting.
My emotions were less volatile.

My life was richer in every way.

Those women established who God is – GOD ALMIGHTY, and who I am  – his beloved child, and then they equipped me to deal with my past, so I could walk into my future. They empowered me to partner with God, to trust him even when life is hard.

And you? Are you both saved and surrendered?

Prayer: Father God, we love you. Thank you for loving us first. For being so patient with us. For drawing us closer and closer to you. Continue to woo us into deeper and deeper relationship with you. In Jesus Name, amen!

Scripture: “For this is how God loved the world: He gave his one and only Son, so that everyone who believes in him will not perish but have eternal life. God sent his Son into the world not to judge the world, but to save the world through him. John 3:16-17 NLT

Posted in Bible, change, God and tagged Believe in Jesus, get out of hell insurance, God is my body guard, Robyn Dykstra, Saved and surrendered
← Do You Fall For This Lie?Would You Settle For Less Than God’s Best? →