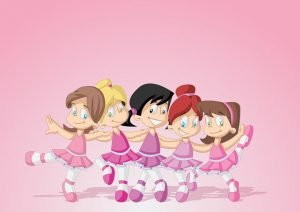 Before everything was shuttered …

Mr. 4-Ever and I, along with hundreds of others, sat in a hot, crowded auditorium for hours to watch a parade of teeny girls in tutus and tights wobble and hop on the stage in front of us.

Every mother and grandma and friend of the family attending knew that the performances of the budding ballerina they came to see was likely to be awkward and poorly-executed, but we each, to a woman, swelled with pride when the little girl we came to see appeared on the stage.

During every number, tiny dancers took turns being out of sync, but as a group, they covered each other’s weakness, one remembering one part and another remembering another part so as a whole, they completed the number.

Occasionally, in moments of complete bewilderment, a ballerina wrangler – a preteen ballerina in matching leotard and tights – would appear from the wings to prompt and shoo her mini versions through their next step.

The sweet ballerina we came to watch, was on the stage for not quite two minutes. She was in lipstick and rouge for the first time. Bravely she swayed and pirouetted nearly on cue. She curtsied to thundering applause and cheers. After the recital, she carried flowers in her arms as if they were an infant, beaming under the praise and adoration of the few of us who were there just for her.

Lessons from the stage

Each little ballerina did the best she could.

Each was celebrated for her effort. None were chastised for missing a step or forgetting a turn.

What if you and I could be the body of Christ, as friends and congregants,
do our personal best and cover each other’s weaknesses without judgment or envy?

Each ballerina was delighted just to be on the stage.

Though it only lasted a minute or two, each one was thrilled to have her opportunity. No pouting about not having the lead. No fussing because she wore yellow instead of pink. Just happy to have a role in the recital.

The mini ballerinas radiated under the praise.

What if you and I learned to receive compliments for doing our best even if our best wasn’t perfect? What if we knew that God was pleased with our effort and motive and that it was enough to secure his affirmation?

When they got stuck they looked to each other for help.

When all were flummoxed, a bigger version of themselves appeared from nowhere to guide and coax them to a glorious next step.

What if we followed the Holy Spirit’s leading as easily as the mini ballerinas followed their wranglers? What if we were willing to admit we need help and could find a wrangler to help you figure out what your next step is?

Taking a cue from tiny ballerinas

Let’s take a lesson from the tiny ballerinas and dance on the stage God has given us.
Watch for cues and ask for directives from the Holy Spirit or his representative to wrangle us back into step with the Father – remembering that God is watching, applauding, and adoring each obedient imperfect step.

Where is God using you and how are you cooperating with Him? Leave me a comment below.

Verse for the day: Whatever you do, work heartily, as for the Lord and not for men, knowing that from the Lord you will receive the inheritance as your reward. You are serving the Lord Christ. – Colossians 3:23-24

Prayer: God release us to dance and play and work in the space and season we are in right now. Reminds us to keep an eye open for ways to encourage and compliment one another. And, please God, teach us to be able to radiate the joy of your undivided and loving attention. We ask all these things in the Name of Jesus. Amen

Posted in Encouragement, faith, Funny, God, Life Lessons and tagged be happy to be in the role God has us in, be the body of Christ, cover each other’s weaknesses, do our personal best, no envy, No judgment, perfectly imperfect, receive compliments for doing our best
← 9 Ways to Ease GriefBe My Valentine →