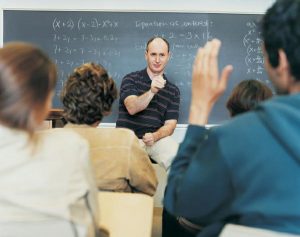 Failure is an effective teacher.

When Dave went to college, algebra was a requirement to graduate. He’s good at numbers, but not when math equations include letters of the alphabet. My man failed algebra four times!

Every time he failed, another lie was etched in his heart. You’ll never pass this class. Just give up. You’re not good at math. You’re more of an artist. Your mind isn’t wired for algebra. You won’t need to know this stuff in the real world.

After five years at the university, (including one year in Spain filming a documentary), he was still one algebra class short of his required core curriculum to graduate.

Eager to get on with his life and unwilling to dedicate any more time to algebra, he gave up and moved on.

He enjoyed success in business as a film and video producer, got married to me, adopted our boys and rarely thought about algebra.

A new season of life.

But then, our oldest kid got to high school. Jake is a math whiz, who tested out of core math classes so he could take AP classes. After a lifetime of problem solving, Dave thought he could do the same —  test out — and conquer that algebra class.

More determined than ever, he took an online algebra class.

Finally, he re-enrolled in college, signed up for algebra and made it a full time occupation. He went to the math lab everyday like it was a job. He solicited help from teachers and hired private tutors half his age who coaxed his answers onto the paper.

He got a 17% on his first quiz but kept going. Kept asking for help. Continued doing the work.

As a reward for his hard word and perseverance, Dave passed algebra with a B+, completing his degree and conquering the lies in his head.

Resistance does not always mean stop.

We often think of resistance as God’s way of telling us to reconsider, change lanes, move on or just stop. All too often we use opposition, awkwardness, and past failures as a reason to quit too soon.

We settle for less than God’s best, calling it contentment when it’s really complacency.

God’s best for Dave was to contend for a passing grade in algebra not only so he could get his degree, but to prove how resistance makes us stronger, more dependent on God, and prove we are capable of hard things.

Dave’s part was to:

So, I have to ask you. What are you using as reason that is really an excuse not to contend for God’s best?

Girlfriend, God wants the best for us, but we have to participate in getting it. If you have the power to change your circumstances for the better while remaining obedient to God, do so.

A closed door does not mean God is against the plan. We need to stop making excuses and take responsibility for making personal and spiritual growth.

What are you sensing God inviting you to change or grow or shift to experience an abundant life? Leave me a comment and I will pray in agreement for you to have courage and opportunity in Jesus Name!

Verse for today: Forgetting what is behind and straining toward what is ahead, I press on toward the goal to win the prize for which God has called me heavenward in Christ Jesus. Phil 3:13b-14 NIV

Prayer: Lord. Sometimes I just get so tired of fighting and so weary of the resistance to my dreams and goals. Put a want-to in me that can’t be quenched. Lead me toward completion and strengthen me to continue to press on. I want all you have for me, so continue to carry on. In Jesus Name amen.

Posted in change, faith, God, Life Lessons and tagged Press on to the goal, Resistance does not always mean stop., Resistance is good
← Want to be a speaker or author?3 Mindsets To Overcome Fear of Failure →