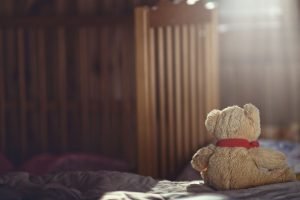 Where do you turn when life is hard? What do you do when you pray and don’t get the answer you need? How do you find the courage to trust God in the worst of situations?

It was the worst day of Catherine’s life. Her daughter was stillborn. Can you imagine? Ugh, the emptiness, the sorrow. Going home with a full diaper bag and an empty baby seat. Dealing with the hormones and milk filled breasts all the while avoiding a nursery filled with stuffed toys and rocking chairs.

In her grief Catherine was angry and instead of relying on God or leaning into him, she turned her back on him, convinced that God had deserted her and was cruel in a way she could not fathom.

She became depressed and found sleep elusive so she drank at night to try to help her sleep and slept all day because she was tired and hungover.

She stopped going to church because it hurt too much to see pregnant women and young children. It took almost 6 months before she could even look to heaven. But when she let go of the offense she had against God and asked for his forgiveness and restoration, he flooded her brokenness with peace.

That’s when the healing finally began. She said, “It took a long time and I still don’t understand why it happened, but after I surrendered my anger to Jesus, my faith became and continues to grow stronger. I can trust that God has a plan, even if I don’t understand it.”

We’ve all been there haven’t we? Wondering how we’ll make it through this hardship or that trauma?

Does God allow more than we can handle? Oh, yes!

Are there things we go through that make no sense? Yup.

As I look in the Bible there are dozens of stories about ordinary people who demonstrate exemplary trust in God to receive extraordinary outcomes.

One of my favorites is when Joshua was leading the Israelites in the charge of Jericho. They have just celebrated the miracle of crossing the raging Jordan River on dry land. The next obstacle to the Promised Land was the walled city of Jericho.

No-one would have conceived that the great battle plan to take Jericho was to march around the city 13 times, then shout real loud. But Joshua trusted God and that the whole city collapsed to be plundered.

As Catherine trusted the Lord, she discovered that the same God who led Joshua into the Promised Land could lead her out of her wilderness, too.

Who would ever guess that Joseph, the favorite son of Jacob, would end up stripped of his coat of many colors, be sold into slavery, be falsely accused of rape, end up in jail to rot — but rise to rule Egypt and be strategic places to save his family from famine?

Catherine discovered that the same God that was with Joseph in his captivity could lead her out of her prison, too.

Trusting God is in the business of restoration and redemption takes faith. The kind of faith that grows in the muck of hardship.

Girlfriend, I don’t know what you’re facing today, but I do know that God is ready with a plan to redeem and restore you. Lift your eyes to heaven and ask him for the plan.

Prayer: Lord God Almighty, when life is out of control, when life is too hard to handle alone, when circumstances are beyond my ability to control or even make sense of, enter in. I’m inviting you into my chaos and asking you to be God over me and my situation. Amen.

Posted in Encouragement, God, Grief and tagged God is in control, hardship, more than I can handle, Robyn Dykstra, trauma, trust God, when life is hard
← The Enemy of Hope is DiscouragementTake the V-Day Challenge! →