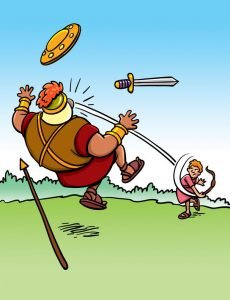 When someone asks you to share your testimony, what you do you tell them?

You have your conversion story, but you also have a thousand other stories when God has intervened in your life.

The Bible cautions us to always be prepared to give an answer for the hope we have. (1 Pet. 3:15) That hope starts with your salvation experience and progresses throughout your life.

In 1 Sam 17, there’s a kid named David with a slingshot. But there’s giant named Goliath, covered with armor holding a sword and a 10’ spear. The kid has the courage to face the giant because he’s already killed a lion and a bear while guarding his sheep.

The victories in David’s past have prepared him for bigger battles with bigger stakes.

The victory over Goliath makes him famous. Other mighty men follow his example of courage into battles. Men and women were drawn to him. 3000 years later, we are still talking about this kid’s courage and victory.

We all have “giants” in our life. Giants we are stuck with that beat us up and boss us around.

We reconcile ourselves to live with these giants. We give up hope of victory over them and simply accommodate them … Until … we see or hear of someone else who’s killed the twin of our giant. When that happens something powerful rises up in us, too.

When my friend turned up at a conference 50 pounds lighter than previous year, a switch flipped in me. She didn’t have surgery or sickness or calamity. She said she lost all the weight making one choice at a time.

As I listened to her testimony, I believed that I could have victory in the area of self-control, too.

When my friend Lois beat cancer, it was just the news I needed to believe for my other friend in the midst of the battle.

Your story of trusting Jesus, a marriage restored, an addiction conquered, a debt obliterated, a near death experience averted, a giant killed against all odds, emboldens us for the next battle and empowers others to slay their giants!

Girlfriend, here’s why sharing your testimony is most important. The giant that tried to kill you, steal from you or destroy you, is coming after someone else. Probably someone you know. Someone you love!

Stop it in it’s miserable tracks by sharing how God helped you conquer your giant. Your story of redemption or a fresh start may be just what someone needs to hear to follow Jesus, trust Jesus, or start over.

Sharing our testimony starts at conversion and progresses through a lifetime of experiences with God. Who can you share a giant-killing testimony with this week?

Verse of the day: I can do all this through him who gives me strength. —Philippians 4:13

Prayer: God, some days it feels like my giants will overpower me and crush me under their feet, yet I know that you, O God, who raised Jesus from the dead, live in me. And through that resurrection power, I can do all things. So I come to you and beg for courage to do hard things, knowing that when I have overcome, I can celebrate and give you all the glory. In Jesus’ name, amen.

Posted in Encouragement, God, Life Lessons and tagged conquer giants, David and Goliath, share your story, share your testimony, tell your story, your story matters
← It’s My Birthday!Have You Said Yes To Jesus? →